TREATMENTS AND SURGERIES | No needle, no scalpel vasectomy

Dr. Marois is qualified to perform a no needle, no scalpel vasectomy, also known as a keyhole vasectomy, at his urology clinics in Greater Montreal and Quebec City.

Usually, the first step for patients seeking a vasectomy is to schedule an initial consultation. During this appointment, the patient fills out a short questionnaire, undergoes a physical examination and is given details about the procedure. Afterward, a second appointment is scheduled for the vasectomy. This take two separate appointments, and involved fees for consultation AND surgery.

Alternatively, patients can have both the initial exam and the vasectomy during a single appointment. However, this is only possible if the exam is normal and the patient does not have a bold disorder or has stopped taking blood thinners.

For your convince and preferences, we offer both possibilities.

Note that Dr. Marois will have to perform the vasectomy with two incisions if the patient is overweight, has a small scrotum, has a short vas deferens or has already had a surgery in his genital area (such as a vasovasostomy).

We recommend that the patient be accompanied by another person. When patients have someone with them, they can be offered medication if they begin to feel anxious.

Please note that the vasectomy procedure is performed in an unaffiliated private clinic and can’t be reimbursed through the Regie de l’assurance maladie du Québec (RAMQ). The confirmation of the patient’s sterility is sent by email after receipt of the results of the spermogram. If, in some rare cases, a second vasectomy should be necessary, we will proceed at 50% the regular price. 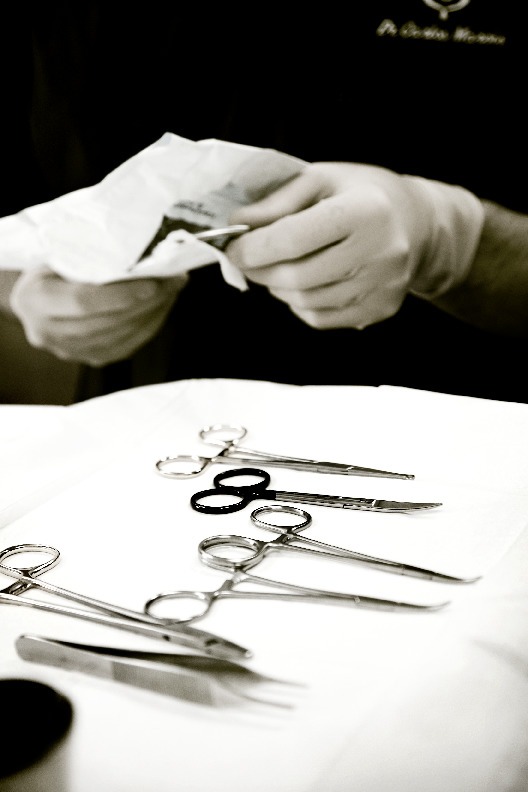 Please note that vasectomies are only performed in a disaffiliated private clinic and therefore not covered by the RAMQ. They are usually carried out in a single appointment. This includes consultation and infertility notification by email after reception of the spermogram’s results.

What happens during a vasectomy?

The vasectomy begins by laying the patient on a table in an operating room designated for minor surgeries. Dr. Marois then administers a local anesthetic in the skin of the scrotum with a needle-free injector (MADAJET). It takes 5 to 10 minutes for the anesthetic to become maximally effective. After, the area around the genitals is disinfected.

A no needle, no scalpel vasectomy involves several steps. First, Dr. Marois will hold the vas deferens in place using a clamp. Next, he will remove the vas so that it can be cauterized and ligated at either end.

Dr. Marois never uses metal clips to clamp the vas deferens. To minimize the risk of recanalization, Dr. Marois will isolate the vas deferens on the abdominal side by interposing spermatic fascia. This unique method takes a few minutes of extra work for each duct. It involves covering the vas deferens with a resorbable thread and a layer of tissue that encircles each duct.

Is a vasectomy a permanent method of contraception?

Normally, a vasectomy is not reversible. If the patient changes his mind and wants to have children at some point after his vasectomy, a vasovasostomy can be attempted. However, there’s no guarantee the procedure will be a success.

Are there potential complications to having a vasectomy?

Complications are uncommon, but bleeding, infection, swelling or pain in the scrotum may occur. If inflammation and discomfort persist, an anti-inflammatory medication may be prescribed.

Very rarely, the vas deferens grows back prior to the spermogram. This is known as early recanalization and occurs when the two ends of the canals reattach and allow the passage of spermatozoa (making the patient fertile).

Delayed spontaneous canalization, occurring after the vasectomy when the vas deferens has been cut, ligated and cauterized, is very rare.

Are there medical contraindications to a no needle, no scalpel vasectomy?

There are a small number of contraindications, all of which are uncommon. These include uncertainty about whether or not one wants to have children, blood clotting disorders, an inguinal hernia and an undescended testicle. Some patients choose to get a unilateral vasectomy, a procedure in which only one vas deferens is cut.

Does having a vasectomy influence your sex life?

The patient’s sex life won’t be affected. There will be no changes in the sensations he feels during sex and no difference in his erection or his ability to ejaculate. Although the ejaculation fluid will no longer contain sperm, the patient won’t notice the difference, as sperm only makes up a small fraction of the fluid. (Most of the ejaculation fluid is produced in the seminal vesicles, two small sacs located at the base of the prostrate where the vas deferens open.)

Is the administration of the anesthetic painful?

Vasectomies are usually performed under local anesthesia. This involves injecting a high-pressure liquid anesthetic under the skin. The patient will feel a pinching sensation, a bit like a blow from an elastic band. The anesthetic ensures that there will be no more feeling in the skin or the underlying tissue.

However, the anesthetic is confined to the area around the injection and sometimes an unpleasant sensation can be faintly felt at the upper part of the vas deferens, in the abdomen.

There’s a small risk of hematoma, since the needle is inserted near veins. The surgery can begin 5 to 10 minutes after the anesthetic has been administered. Medication is offered to accompanied patients who are anxious about the procedure.

What technique is used for the vasectomy?

After a physical exam, Dr. Marois determines whether or not he patient can be operated on using the no needle, no scalpel vasectomy method. This technique involves making a single incision at the centre of the scrotum. In part, the decision will depend on the length and mobility of the vas deferens.

Men who are overweight, had scrotal surgery or been referred to the clinic following a failed vasectomy may require a vasectomy technique that involves two incisions (one on either side). This technique may also be necessary if the vas deferens are too short for a standard central incision. In such cases, the cost of the vasectomy is higher.

Can a spouse be present during the vasectomy?

Normally yes, but not during the active COVID-19 period. Thank you for your understanding!

The person who accompanies the patient to the procedure can be present in the operating room during the vasectomy if it helps to calm the patient. Note that a protective screen is placed over the patient’s chest to prevent him from seeing the surgery.

Contact us to schedule a no needle, no scalpel vasectomy in Montreal, Laval, on the South Shore or in Quebec City.