What is a vaginal atrophy?

Many postmenopausal women face vaginal atrophy. 45% of them experience symptoms such as vaginal dryness, itching, irritation, or pain during sex intercourse. To treat vaginal atrophy, we use a therapeutic process called “Erbium Yag 2940 nm laser”. This technology consists in a circumferential photothermal treatment of the vaginal walls.

The laser stimulates collagen production in the vaginal tissue as well as enhancing the vascularization of the vagina mucous membrane. It naturally improves the condition of vaginal walls.

If you suffer from postmenopausal vaginal atrophy, this treatment is recommended for you. It is also suggested for women to whom any hormonal therapy is counter-indicated after recovering from breast cancer. Finally, this procedure is also an alternative to those who do not want either to apply topical cream or take vaginal estrogen 2 or 3 times a week. 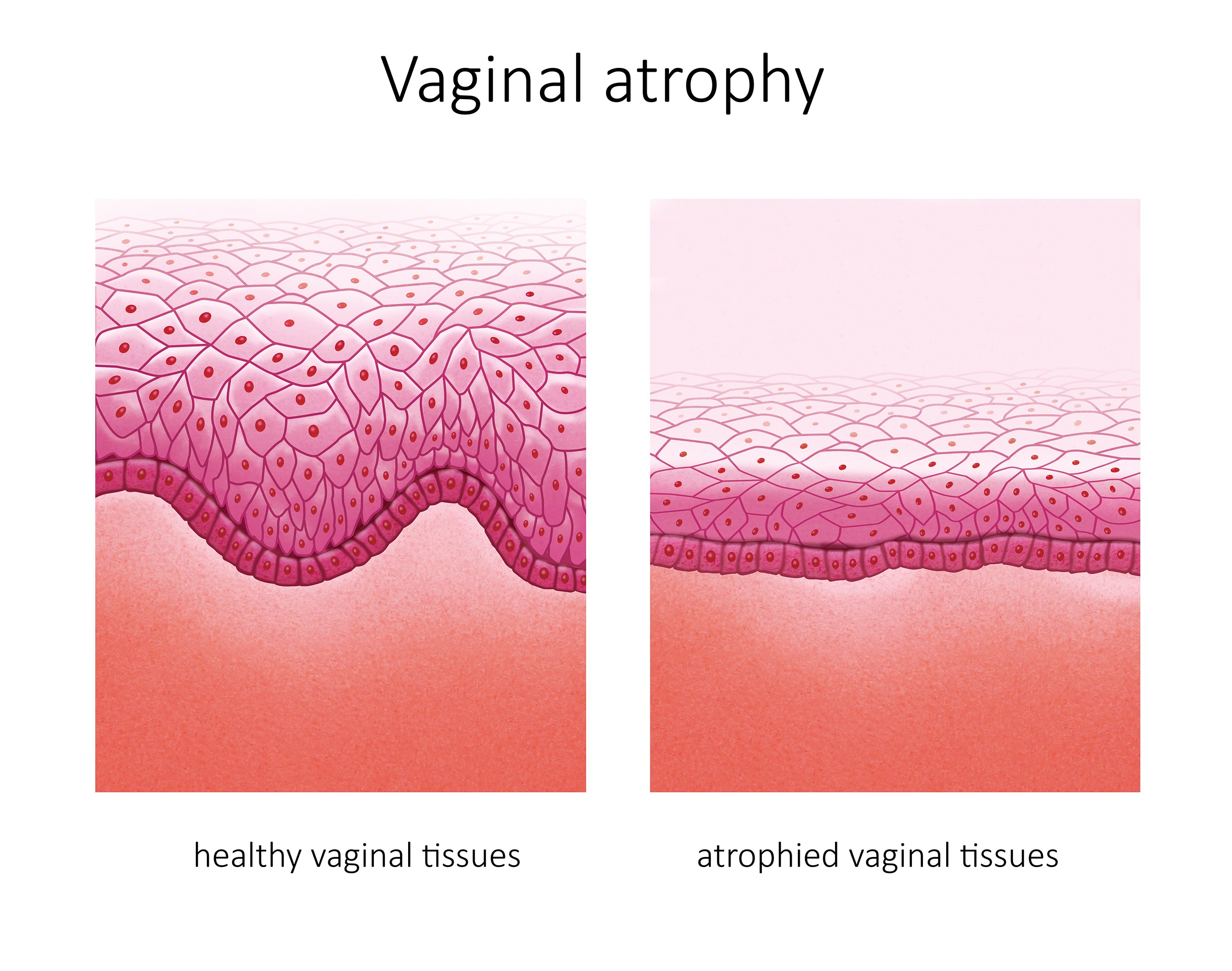 How does vaginal atrophy occur?

Urogenital atrophy results in a decrease in the uterus, ovaries, vaginal canal and vulva. Endometrial atrophy is part of the process that leads to menopause. All the vaginal wall (including collagen, elastin and smooth muscle) undergo degeneration. The vaginal epithelium loses cells and thins.

Vaginal blood flow is reduced and associated with decreased lubrication during sexual arousal, as well as increased sensitivity to trauma and pain. The numbers of lactobacilli are declining and the vaginal pH is increasing, giving a better environment for colonization by pathogenic bacteria. The length and diameter of the vagina narrows, the vaginal cul-de-sacs disappear and the crests of the vagina fade. These changes are attributable to the decline in estrogen levels during menopause.

What are the treatments for vaginal atrophy by lifestyle modifications?

- Stop smoking: Smoking leads to increased metabolism of estrogen and is associated with increased rates of osteoporosis and vaginal atrophy.

What are the non-hormonal treatments that vaginal atrophy?

Vaginal moisturizer
Replens (the only vaginal moisturizer available in Canada) had a beneficial effect equivalent to that of vaginal hormone replacement therapy, including positive changes in the index of maturation of the vaginal epithelium, as well as increased hydration and vaginal secretions. Replens, in comparison with vaginal replacement therapy, has shown equivalent improvements in vaginal itching and irritation, as well as in dyspareunia.

Vaginal lubricants
Several lubricants are available in Canada. None of these products exert long-term therapeutic effects.

What are the hormonal treatments for vaginal atrophy?

strong>General replacement hormone therapy
General hormonal therapy is indicated for women who want treatment for various symptoms associated with menopausal estrogen deficiency such as hot flashes and sleep disturbances, along with vaginal atrophy.

Each of these forms of vaginal hormone therapy has been proven to reverse vulvovaginal atrophy and symptom relief.

Are there other treatment alternatives for vaginal atrophy?

Erbium Yag laser treatment of vaginal atrophy has been an innovative treatment in recent years, especially in Europe. This is a therapeutic process precisely controlled by Erbium Yag 2940 nm laser. It consists of a circumferential photothermal treatment of the entire lining of the vaginal canal wall. The laser triggers the production of collagen and improves the vascularization of the vaginal mucosa. It naturally restores the physiological state of the vaginal wall.


What is the treatment for vaginal atrophy?