About 1 in 1000 women suffer from this chronic disease, which generally affects the clitoris, labia minora and vaginal opening.

Patients often worry that vulvar lichen sclerosus is contagious; however, the condition is neither contagious nor can it be sexually transmitted.

Vulvar lichen sclerosus can have a major impact on a woman’s sex life, as it often causes pain during vaginal penetration and an overall reduction in sexual satisfaction. Some women undergoing treatment for this condition have difficulty attaining orgasm, while others no longer feel any sexual desire and may, as a result, choose to avoid sexual intercourse altogether.

Vulvar lichen sclerosus can also impact a woman’s psychological well-being. Feeling desperate, she may turn to physiotherapists, psychologists or therapists for treatment . Some women suffer an additional burden if their partners refrain from intimacy with them due to the external symptoms of the condition. These include gradual changes to the skin of the vulva , the appearance of spots of various colours and the receding of the labia minora.

Nevertheless, it’s entirely possible for women with vulvar lichen sclerosus to have healthy, fulfilling sex lives. For this to happen, however, they need to gain control over the disease by integrating various drug and medical treatments into their lives. 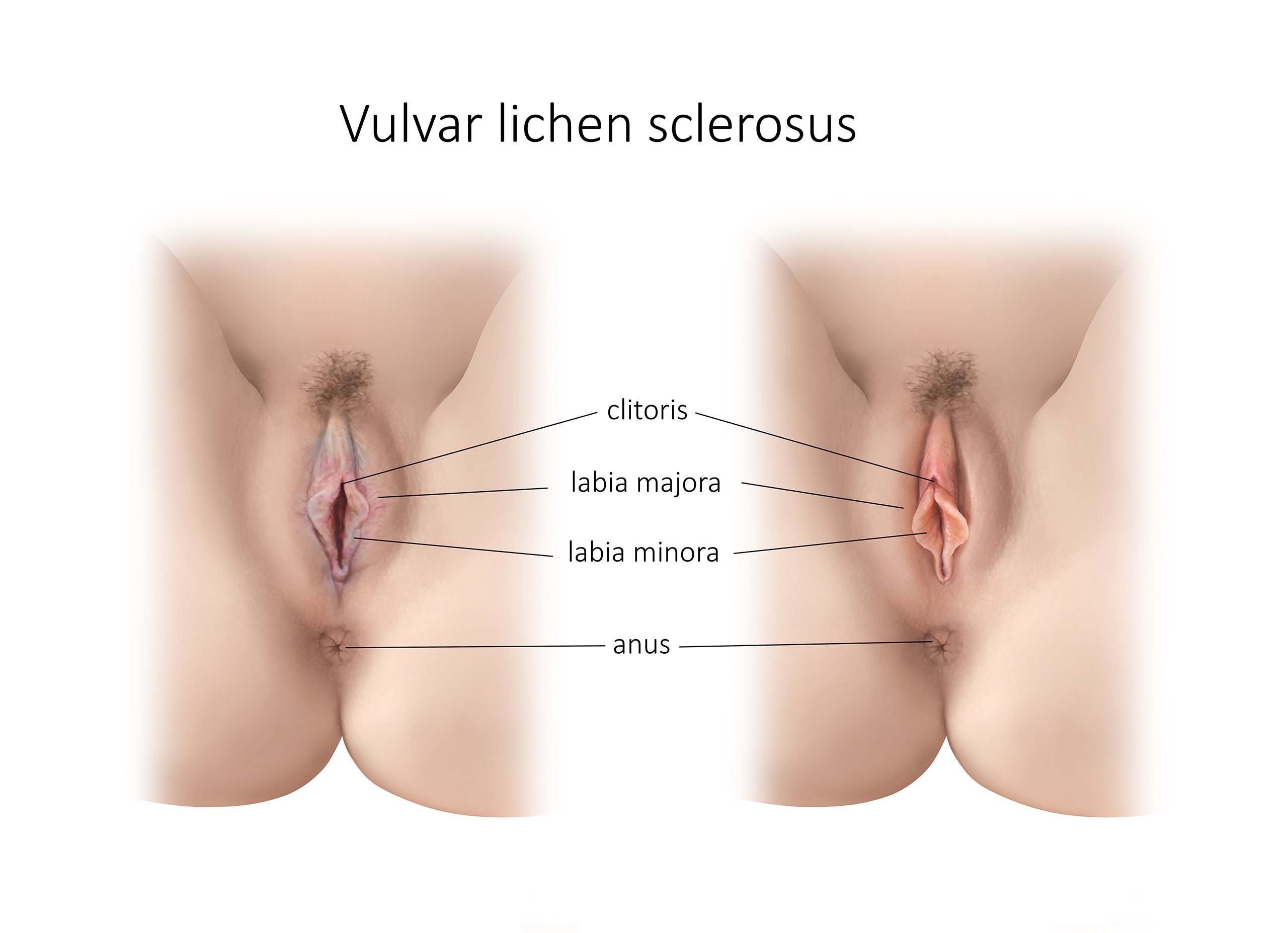 What are the causes of vulvar lichen sclerosus?

Vulvar lichen sclerosus appears to be principally caused by an absence of reproductive hormones. The condition occurs mainly in prepubescent girls and postmenopausal women.

What are the symptoms of vulvar lichen sclerosus?

Generally, the signs and symptoms of vulvar lichen sclerosus peak around menopause, or after a woman turns 45 years old. However, women of any age can be affected by the condition.

The most common symptoms are itchiness around the vulva, irritation, pain, difficulty urinating and bowel problems. In addition, the skin of the vulva tends to become thin and white. This thinning of the skin can cause bleeding, especially if the woman scratches the area. The white patch often forms the shape of a figure eight extending from the clitoris to the anus and encircling the vulva.

Generally, the areas of the vulva with hair growth aren’t affected. However, without treatment, the labia minora may merge with the labia majora and disappear. Additionally, the clitoral hood may close up and the skin near the vagina may shrink and progressively close the vaginal opening.

Some women also experience pain during sex or get sores in the opening of their vagina as a result of intercourse.

Additionally, there are women who display few symptoms .

How is vulvar lichen sclerosus diagnosed?

Typically, the diagnosis is based on a visual examination of the vulva and the perineal area. A biopsy may also be performed during the initial visit to confirm the diagnosis.

What treatments are available for vulvar lichen sclerosus?

The main goal of treatment is to relieve symptoms, control the disease and prevent changes in the structure of the vulva. Unfortunately, there’s no cure for lichen sclerosus.

This treatment involves applying a thin layer of topical corticosteroid cream to affected areas. The cream must not be used on pubic hair or on the unaffected area of the vulva. It’s applied before going to bed for about four weeks and, thereafter, two or three times a week.

This is a new skin treatment that improves skin quality in the vulvar area. It involves a painless injection of platelets, a type of blood cell that plays a crucial role in healing. When the platelets are injected, they release growth factors that stimulate the dermis of the skin, accelerating its regeneration and slowing down the aging process. This results in healthier skin, with the restorative effects extending to the skin’s texture, thickness, pigment and density.

Contact us to learn more about available treatments for vulvar lichen sclerosus .