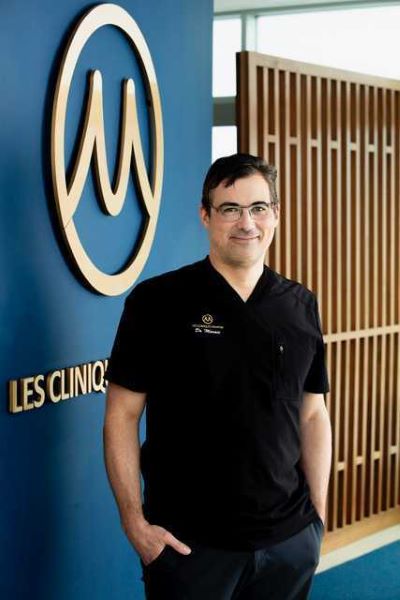 The first urologist in Quebec to practice in the private sector, Dr. Marois is the founder of Cliniques Marois. Over the years, he has added the services of Dr. Ouellette, Dr. Sajous and Dr. Bazinet in order to complete his team of experienced and caring urologists and to offer quality care to as many people as possible in the province.

Who is Dr. Marois?

Dr. Carlos Marois began his career as a urologist in 1998. He began his career in the public sector, practicing and perfecting his skills before moving into the private sector and opening his own clinics, where he finally had the opportunity to implement new and revolutionary technologies. These technologies allow him to make more precise and efficient diagnoses. These include transperianal prostate biopsy, cystoscopy and flowmetry.

Always with the well-being of his patients in mind, he has a keen interest in minimally invasive surgeries under local anesthesia, which he performs in his clinics in fully equipped surgical rooms set up to make the experience as pleasant as possible for all those who need to undergo treatment or surgery. Operations under general anesthesia are performed at the Centre métropolitain de chirurgie in Montreal, the only private hospital in Quebec.

He was the first urologist to acquire a private urological operating room with floroscopy. Dr. Marois is able to perform all endoscopic surgeries.
Dr. Marois specializes in circumcision for infants and children, as well as adults. For older patients, he uses a surgical glue technique that ensures utraesthetic results. He is also one of the first urologists in the private sector to use penile implants for erectile dysfunction, a problem he battles with various methods just as he does for female sexual dysfunction.

In which clinics does Dr. Marois practice?

Dr. Marois sees and treats his patients in clinics on the South Shore (located in Saint-Hubert), in Laval and in Quebec City.

Areas covered by this private urologist

Dr. Marois sees and treats patients from all over Quebec in his 3 clinics. It covers most of the major regions of Quebec: Montreal, Laval, Montérégie, Eastern Townships, Lanaudières, Laurentides, the National Capital, etc…